A quick study of the nascent lottery sector in the African continent and delving into the growth drivers behind the double digit sales growth of 13% and a quick view of the boundless opportunities available in online lottery in Africa.

The lottery business is a multi-billion  dollar industry and only growing steadily every year. First-quarter on first-quarter sales have increased by 3.1% globally in 1Q16

[1]. The saturated North American market might have witnessed a growth of 15.7%[1] but it is the comparatively nascent African market with a growth of 13%[1] that is the real tasty morsel. Compared to the rest of the world, it is a much more robust market with a constant rising graph with a mixed bag in Europe and contraction in Asia Pacific. The African lottery market has constantly beaten the global average. The lottery sector in Africa is standing on 4 pillars- Cultural support, Popular support, Economic support and Legislative support.

Human being is a product of years of evolution, the trials and tribulations faced by the ancestors and culture thus derived and followed. As Malcolm Gladwell points out in his book Outliers, the history of a region dictates the perceptions and actions of its people. Africa has been built by a legion of trail blazers and highly motivated individuals who fought against and overthrew the dictates of time like Nelson Mandela. Africa belongs to a class of people who have risked all on a whim and a chance to establish their individualities and earn great fame and respect. Karen Blixen encapsulates the sentiment perfectly in her popular book Out of Africa, “You know you are truly alive when you’re living among lions”. Betting, small or big, comes easily to such daredevils.

The lottery is one of the most popular forms of gambling in Africa. Studies have shown that seven out of ten people play the South African Lottery on a regular basis. According to the National Gambling Board of South Africa, 78.9% of gamblers buy national lottery tickets[2], which make it a very lucrative business. In fact, people in many parts of Africa view the lottery as their major source of revenue. The National Lottery of South Africa has created as many as 473 millionaires[3] since its inception in early 2000 fuelling this drive over the years. Such dreams fuel the lottery industry and it enjoys popular support.

Economic growth in Africa is above the global average and it remains the world’s second fastest growing economy after East Asia. According to The African Economic Outlook (AEO) report, growth in real GDP is estimated at 3.6%, higher than the 3.1% for the global economy and 1.5% for the euro area[4]. Average growth in Africa is expected to remain moderate at 3.7% in 2016 but could accelerate to 4.5% in 2017[4]. With urbanisation, African cities are growing consumer markets increasingly targeted by foreign investors. Disposable income and spending power in Africa’s major cities will grow. Forecasts show that the GDP of major cities is increasing.

Lotteries enjoy a more favorable legislation than gambling. In Nigeria, only lotteries are permitted for online gambling. Lotteries are well regulated and well organized leading to increase in confidence in players and organizations. In South Africa, National Lottery Commission is the regulatory authority. Such regulatory authorities protect the interests of every participant and also ensure that the game is played fairly and prizes are distributed according to the set rules. 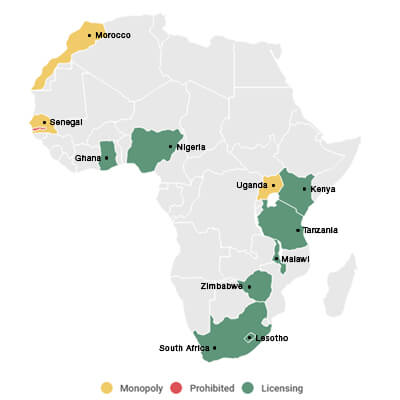 The lottery industry has also been revitalized by the advent of the internet and the various avenues of communication and marketing it has spawned. The effective use of social media has propagated the sales of online lottery tickets. This means that lottery, specifically Lotto games, are no longer localized but can be played by anyone around the world. This is an effective marketing tool for interested players in those countries where Lotto is not legalized. Winnings for tickets purchased online through a lottery ticket concierge service will automatically be claimed by the agent on behalf of the ticket purchaser. This facility ensures that all winnings are claimed well within the allotted time and do not run the risk of expiring. As can be seen from the map above, (map is provided in email attachment). Most of Africa is still untouched and there are immense opportunities for capturing this virginal market. Startups especially with disruptive technologies or game changing (no pun intended) ideas can revolutionize the industry.

There is a huge slice of the pie as yet unclaimed on the African continent of the lottery business. Online lottery is an unchartered territory on most of the continent. It offers endless opportunities to the first mover. To help claim these, the required infrastructure is already in place due to globalisation and the boom of online lottery in USA and Europe. Companies like Dusane Infotech are world leaders in delivering the setup, systems and solutions for online lottery. Having worked in over 25 countries, such software solutions providers are the essential foundation required for any entrepreneur or enterprise venturing in this field.

The lottery industry is by far the most lucrative industry in gambling and one of the most profitable markets in the world, making more money than cinema, video games and professional sports. In USA alone, the Powerball itself saw a record breaking spend of $2.6bn. In the coming years Africa should see an astronomical growth in the lottery business as new players enter the market, new markets are opened and economy strengthens. As Pliny the Elder says, “There is always something new out of Africa.”

Dusane Infotech is an expert in technology solutions for the online gaming industry with more than 12 years experience and turnkey implementation of gaming solutions in 25 countries across 4 continents. We provide comprehensive, robust and integrated consultancy services to our clients for lottery operational setup and roll out. Recognising the potential of Africa, we have a specialisation in this area having worked in almost all the countries where gambling is prevalent like Chad, Ghana, Kenya, Mauritius, Nigeria, South Africa, Swaziland, Uganda and Zimbabwe.

Do NOT follow this link or you will be banned from the site!